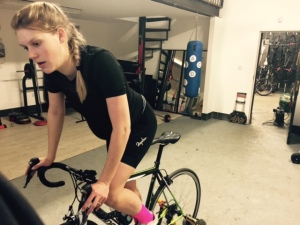 Pregnancy is different for every woman and therefore everyone’s activity levels should be tailored personally to them. I feel that the age old advice of siting on the sofa with your feed up for 9 months (albeit very tempting) is the wrong advice and is somewhat out dated. We know that if you are used to exercising there is no reason not to continue this through your pregnancy. If professional athletes can keep up their rigorous training without too much bother, then the rest of us can surely keep up a bit of running, swimming, zumba, cycling, yoga or whatever else you enjoy. Labour is a physically demanding feat of endurance (mine was 36hours long!!) as is caring for a newborn baby and lugging a gravid uterus and fetus around for months on end. So why not keep yourself in as good a physical condition as possible?

I discovered I was pregnant at the start of my cross season. It came as a bit of a shock. I had worked hard to be fit for the cross season and I was determined to get some racing under my belt before a bump appeared. I’m sure some of what I did during my pregnancy wouldn’t come highly recommended in the current medical advice. I however discussed with my midwife at my first appointment my intentions to stay as active and as fit as possible. She was overwhelming in her enthusiasm. She felt that if I was used to exercising and pushing myself there was no reason to stop during my pregnancy all she advised is that “I listened to my body, did not overheat and remained well hydrated.” All good advice. So with her blessing I raced my bike and carried on training as usual for the first trimester. I say as usual I have clearly already forgotten how sick and bloody knackered I felt. The first trimester (for me) was definitely the worst. I was working long hours and night shifts at work and racing at weekends. I realised it was important not to get run down. I ate what a wanted when I wanted and I rested as I needed. So perhaps not training as usual perhaps training at 75%. But I found it helped. Certainly getting out in the fresh air on my bike or for a steady run definitely eased the nausea and lifted my spirits when I felt shattered.

As my pregnancy progressed I had to somewhat adjust things. The front of the bike was raised to accommodate the bump and I took up swimming in my second trimester. I am not a swimmer, I had some vague lesson as at school and that is about it. I had no idea how competitive a public swim session could be at our local pool or how much equipment people take just to swim up and down in a lane. Once I had managed to settle in with a friendly bunch of swimmers and with a few helpful tips from best mate and team mate Diane Lee (who is a super duper pro triathlete and expert swimming instructor) I was soon bashing out 80-100 lengths of front crawl in the early mornings. I wasn’t fast but it was enough to get my heart rate up and it helped with some minor backache I had been getting from spending 13hours on my feet at work. I ran a bit during the first trimester but as I developed more of a bump I struggled with running. I think if you are a keen and dedicated runner your body probably copes with the bump and extra weight better. I am used to sitting on a bike saddle so I didn’t find it that comfortable and instead replaced with running with long hilly dog walks.

As the second trimester progressed I found cycling out on the road more uncomfortable. I needed a lot of wee stops and as it was winter the weather was bloody awful. I switched to the rollers and then the turbo trainer as the bump progressed. I missed being out in the fresh air and so I walked with the dogs. During my second trimester we also went skiing for a week. I’m a confident skier and there was no way I wanted to miss out so I skied with everyone else just slightly slower andperhaps more cautiously that I would do normally and had a fabulous time. I have to say the après ski was slightly marred by a lack of jaeger bombs, but the good company made up for it.

During my third trimester I swam more than I cycled but I still tried to do two good sessions on the turbo each week. Theses were focused on sub threshold efforts and strength work (hard gear low rpm).

With my due date approaching I spent that last week relaxing and putting my feet up. Sabi arrived the day before she was due. Labour was a lengthy process but the act of actually pushing her out was relatively straight forward. We went home the next day and have been gradually finding out feet. I gained weight during my pregnancy I was 58Kg pre pregnancy and weighed 71Kg at the end. Three weeks later I weighed 61kg and three months later I was back where I started. Breast feeding helped as was staying active.

On reflection I was very lucky during my pregnancy, yes there were days when I ddin’t want to venture out from under the duvet and so I didn’t. If that was what my body was telling me to do I tried to listen to it (even though I found that quite hard). Yes there were tears when I wanted to be out on my bike and I couldn’t be. I know not every woman will feel up to doing lots of exercise, but what I want to demonstrate is that if you do feel up to it, do it, get out there, get the blood flowing, get a bit of a sweat on. You will feel better, you and your baby will be healthier for it. In the UK half of women over 35 are classified obese, a lot of these women felt they gained the extra weight during pregnancy. We need to be sending out a message that the activities you enjoy need not stop.

And for God’s sake don’t forget to do your pelvic floor exercises.

For further reading regarding exercise and pregnancy I would recommend Bump it up a book by Prof Greg Whyte OBE.